Prince of Chariot of the Earth

Wodensday - Wednesday - I was thinking about the day dull and heavy with smir. The chemtrail's had done their job. I was thinking that despite having been in the woods for two days I still was feeling a little stir crazy and wishing to journey further to feel nature and connect more deeply. My father was nearby and I thought of our relationship and the qualities that have come of it. His severe exterior yet still he had that care for the clan unit.So I pulled my Haindl Deck and pulled a Card with all of that around me and it was The Prince of Stones. It seemed perfect on numerous levels. 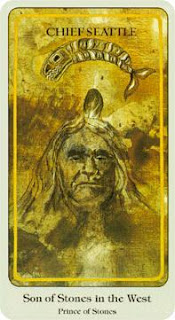 Only but 2 weeks ago I had visited The St Mungos, (Kertigen), Museum of Religious Art in Glashgu and while I found it disappointing at the lack of displays relating back to Neolithic sites in Scotland/Briton there were some beautiful displays.One in particular moved me deeply and this was the Chilkat Blanket. 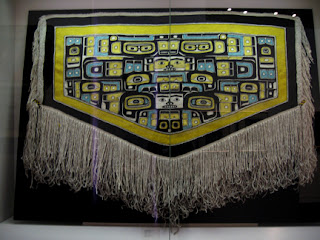 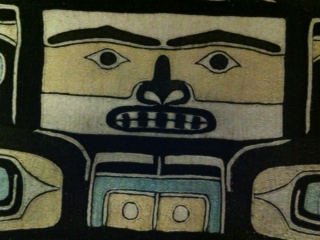 It was ancient an imbued with the numerous totems of Tinglit Tribe form Alaska.I also regularly read Chief Seattle's Address to the Nations and it always reminds me of the importance of our symbiotic relationship with nature. The Card Chief Seattle: Son of Stones in the West - Prince of StonesChief Seattle was one of the last leaders of a nation of Native Americans, on the Northwest Coast of North America, (Turtle Island).On the image his hair is connected to the Rocks of the Earth. A lightening bolt falls behind him and he is wearing the eagles feather. All Shaman have an Eagle and the feather is a symbol of connection to the divine as well as a symbol for the Plains People, he speaks his truth for all the Nations.

Above is the Whale Totem his bond between the animal and the man, and the journey that he is on is often spent in the belly of the whale. He takes action to make positive changes. He must not despair or be selfish with his gifts.I made mention of Virgo being my rising sign and how when I had pulled The Moon XVIII she had been Waxing in Virgo, again today the Astrological Correspondence is Virgo. This is the Prince of the Chariots of the Earth and his message is beyond time.