At the age of 11 my mothers health deteriorated to the point that she could no longer function in society, My half brother and sister who were younger than I were placed in foster care. I was heading in the same direction.

Whatever or whether it was a mixed blessing my paternal father took me in with his new family. We moved to another small village called Kirkcolm in The Rhinns Of Galloway.

It was another period of another difficult circumstance, more out of the frying pan and into the fire.

Beset by bullies, self hate, grief and basically feeling ill nurtured and spiraling into depression myself.

It was the numerous spirits of nature in the local woods that saved me. Or at least kept me going and helping to change my perspective of my relationship with the great all that is Mother Earth.

The woods were large, once a country estate called Corsewall owned by the local Lairds called Lord Buchanan, it had become rundown and overgrown.

More importantly it was Out of Bounds to all locals and policed by a bitter old Gamekeeper.

There was so much to see, explore and do, so many diverse trees and animals, it was my wild adventure.

I discovered quite a lot about the nature of earths spirits and the fey became my family.

One of the things I discovered or should I say rediscovered, inside a copse of massive Rhododendron Trees was an ancient Celtic Stone. Next to the stone was a big hollowed out stone Cauldron with a massive fitted stone lid. Inside the Cauldron lived a big Auld Toad. We all became friends. Over the following few years I spent more time in those woods than anywhere else. I had little or no need for human friends as the area was my family.

I knew every path, every run and hiding place. I listened and felt everything. It was a child’s magical playground.

Of course it was not without it’s dangers, especially as it was considered out of bounds to us mere mortals.

I would spend a lot of time upsetting the illegal traps that were set by the gamekeeper, much to his annoyance. This battle of who knew the land better progresses; I would like to think that I won that battle.

I was like a wild Satyr in those days, fleet footed, silent and invisible.

So back to the Celtic Stone.

One day I went back to the spot and it was all gone. The local church had taken them away.

These days the Cross is up the hill in the Graveyard of the Church.

The Cauldron is aside the Church filled with flowers, the lid cast aside as of it did not belong. And the great big Auld Toad is long gone.

The Celtic Stone is described thus:

‘On one side, the hammerhead cross carries a rough representation of the Crucified Christ. Another figure stands below, flanked by two birds, a set of blacksmith’s tongs and an unidentified rectangular shape. It has been suggested that this lower figure is the Scandinavian hero Sigurd, juxtaposed with the Crucifixion to highlight the mingling of pagan and Christian beliefs in a region colonised by Vikings. On the other side of the slab, the hammerhead cross is decorated with spiral patterns, below which are two horns, a coiled serpent and a panel of interlace terminating in a pair of snakes.”

Although personally I see very little Christianity in the Stone. To me it is Celtic, Norse and Very Pagan. 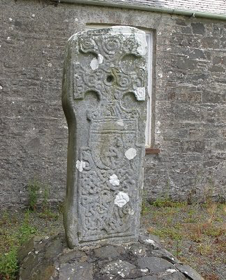 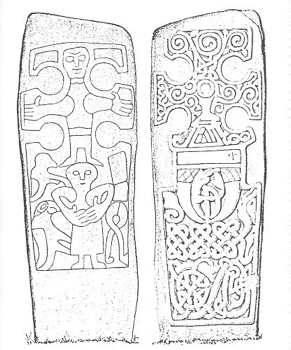