This is one of the Jewels I discovered in Egypt the listening tastes and sounds of the Nubian's.
Posted by Unknown at 13:02 3 comments

I am in you, what you see I have seen
Every place you have ever been
Intentior or just a nagging note of doubt.

Every Wizard Every Dream these evergreen oscillation of numbers evoked with wyrd alchemy to evolve as a fibonacci spiral.

I am potent within without you.
I exist here before you? Yes.
So you perceive me with your own eyes?
Am
I
Not
Manifest ..... also as an archetype.

And still you seek?
The question begins the question and in this occasion the answer follows and replies.

Email ThisBlogThis!Share to TwitterShare to FacebookShare to Pinterest
Links to this post
Labels: one, perception, random, wisdom, wizardparadox

Poised like a thunderbolt, part listening, part calculating a bodhisattva aware that there is some purpose to this fleeting wave of thought and feeling.

In another reality the voice continues to spill forth, part listening part calculating an illumined catalyst inducing a cathartic experience in the performer.

This was about boiling things back to basics this was about two’s and I am sure I was expected to provide an object to act as a fuse between some hidden synapse.

So bodhisattva becomes three another number moving in a different direction a dynamically different display. Was there somewhere in this moment of alternative existence and answer to the far too terrible issue of the two?

A head moved seeing sideways different ploys and routes that the two could choose. To focus and narrow on what? Well a path of least resistance is preferred though not always the solution.

The Three all sat back to back - their form poise breath and heartbeat were identical. Back on Gaia one would of thought them triplets at the very least relative. And relative is true in terms of time and space.

At least one of these beings had not incarnated on the axis mundi.

Upon their fine crown was a diamond crystal grail within were drops of sapphire water inside this swirling world were oils befitting the senses of gods. The purpose of the three was that of Air they were there to support the mystery of another veil.

What was up could next be down, it would matter not.

The world of Air existed as did that of water - Fire was spiced below, a mystery hand had appeared out of distance with a taper.

The bodhisattva who had not incarnated never seen the hand.

The other two who were aware continue, it is of no matter to follow an alien thought of mysterious hands, only to accept that fire existed, its heat funnelled up towards the grail supported by the Air Giants who sat firmly on a giant disk or Earth.

Satisfied that the elements were invoked the listener attempts to relate further what was probable. 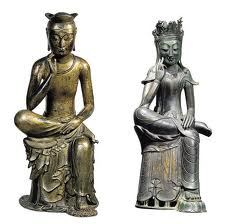