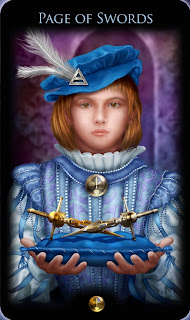 Tower Tarot of Thorsday
ts Thorsday = Thursday
My more favoured T Day of the week.
It was 00:33 when I pulled this card.
I was born on a Thursday and it is the Day that is Ruled by Jupiter who also rules Sagittarius.
The Page of Swords
from the Legacy of the Divine Tarot by Ciro Marchetti
As I pulled this card I was considering this day and the what happens next, back to travels on Friday, will I be able to access the net etc on my journeys.
I was also at the time having an ongoing thread of great randomicity on Facebook
Which now stands like this…

Step out into the light for the light does not ask for more light -
even the seeds of the earth know such mysteries -
grow forth in infinite splendour -
such is the magnitude of the human soul that it can portray,
craft and create for all action should be done as ART.
For that is the perfection of alchemy.No need for Cupids arrow Sting.Freedom is to be free of the Ring.Each lady a Queen Each Gentleman a King.Together upraised voices to Sing.Quote - Jonathan MacLean-Lambie 00:33 28th of June 2012.

And then I looked at the number which amused me greatly.
33 the same as the Scroll of the Bards.. And all the numbers when reduces = 11 now either that is Magick or Obsession
And so to the card.
Dressed in Blue Silks, trimmed with rows of white pearls. A white had decorated with two feather, (Balance in Duality), and an elemental sigil for the Air Element.
The Page looks out and forward towards the court with an intensity. The appearance of all gives of the sense of a dignified individual who understands the seriousness of their Royal Duties. Tow small ceremonial swords one gold and one blue are presented to his audience. The symbols of Duality and the hemispheres of the brain. These are in balance.
Yes this Page remains a trainee, crafting skills and qualities that will develop over time and sometimes with the inevitable delay.
There is a message that come from afar, which are brought with forceful honesty and learning.
The Prince of the Princess of The Rushing Winds
Prince of the Rushing Winds, Lotus of the Palace of Air
Keywords: Student, Meantally Active, Forceful Communication, Declaring, Learning
The Season of Winter
The Throne of The Ace of Swords - Ruling over Winter Through the Signs of Capricorn, Aquarius and Pisces.
And this is an Air Card - The Moon has recently entered Libra the Cardinal Zodiacal Sign. Perhaps it is for myself to look at the numerous influences on my natal chart in the First and Second House where there is a fairly hefty stellium.
Discernment
Speak Truth 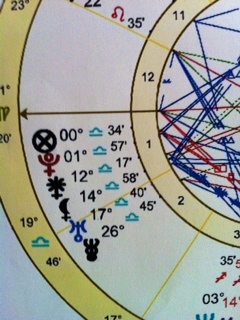 Lot of Fortune
Pluto
Juno
Black Moon Lilith
Uranus
Hygeia
So that is now what I will look towards.
Khabs Am Pekht☽✪☾Sgian-dubh-I-won’t-let-them-Immanentize-the-eschatonEn-Ferus-Hostis-I-Tego-Arcana-DeiThe Magus 9°= 2□   XI°Pan-EssenceShWaLuxEL