The altar is decorated with the symbols of autumn: pinecones, oak sprigs ,acorns, ears of grain, etc.
After the Circle has been cast, the coven stands in a ring facing inwards, men and women alternately. The High Priest stands to the west of the altar and the High Priestess to the east, facing each other.

HPS: "Farewell, O Sun, ever-returning Light,
The hidden God, who ever yet remains,
Who now departs into the Land of Youth
Through the Gates of Death
To dwell enthroned, the Judge of Gods and men,
The horned leader of the hosts of air -
Yet even as he stands unseen about the Circle,
So dwelled he within the secret seed -
The seed of newly-ripened grain, the seed of flesh;
Hidden in earth, the marvelous seed of the starts.
In him is Life, and Life is the Light of man.
That which never was born, and never dies.
Therefore the wise weep not, but rejoice."

HPS hands HP the wand, and picks up a sistrum; they lead the dance three timesaround the altar.
The Candle Game is played, followed by cakes and wine and any other games theHigh Priestess decides on.

The men form a ring facing inwards, either sitting or standing. The women standin a ring outside them, standing on something if too short. The men pass alighted candle from hand to hand, deosil, while the women lean forward and tryto blow it out.
The man who holds it when it is blown out gets three flicks of the scourge fromthe successful blower, and must give her the Fivefold Kiss in return. Thecandle is relit and the game proceeds. 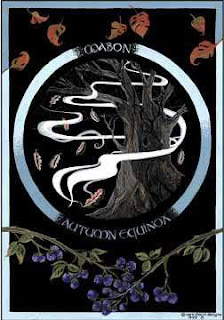