Cone of Power One

HP leads a ring dance deosil about HPS who stands in the centre.

Coveners are arranged man and woman alternatively, facing inwards and holding hands (left palms up, right palms down). all dance and chant either the Witches' Rune or the call of the ancient Mysteries:

All: "Eo, Evohe !"
Dance and chant faster and faster until HPS senses that the time is right, whereupon she calls:
HPS: "Down !"
All shall drop to the ground in a circle facing the HPS. If there is coven work to be done, now is the appropriate time to do it. Or a meditation upon the Moon's season, or such other matter as may be fitting or needful. At an esbatWine and Cakes will follow, but at a Sabbat the Great Rite comes first.

This was the old way. The circle was marked out and people stationed to whip up the dancers. A fire of candle was within it in the direction where the objectof the rite was supposed to be. Then all danced round until they felt they hadraised enough power. If the rite was to banish they started deosil and finishedtuathil, so many rounds of each. Then they formed a line with linked hands andrushed toward the fire shouting the thing they wanted. They kept it up 'till they were exhausted or until someone fell in a faint, when they were said to have taken the spell to its destination.

- Doreen Valiente gives just about the same text in "The Rebirth ofWitchcraft", describing it as notes she made from Gerald Gardner'sdescription of the ritual used to deter Hitler from invading Great Britain. 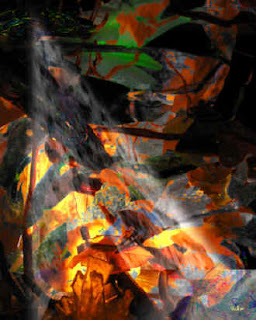