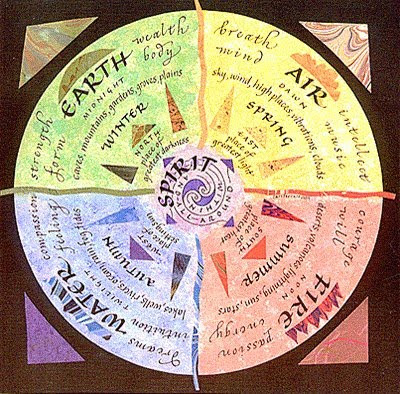 Occultists of olden times regarded the spirits of nature as being divided into 4 groups, according to the 4 elements of life. The spirits of earth were called gnomes, those of water were undines the unseen inhabitants of air were called sylphs and the spirits of fire were known as salamanders. These names were traditional however, gnome seems to derive from the Greek "gnoma" meaning "knowledge". So the gnomes are the knowing ones.

Undine is from the Latin "unda", a wave, they are creatures of the waves.

Sylph is from the Greek "silphe", a butterfly, they are depicted world wide as delicate human forms with wings, those of butterflies or dragon flies.

The word salamander is less certain in origin but it may be connected with the Greek word "salambe" " a fire place".

The salamander was visualised as being a like a jewelled lizard or a small dragon having the colours of the flame of fire. All the above elementals may take on the form within your own subconscious racial heritage, that which they assume will be more pleasing to you.

Friendly elementals are believed to assist us in our magical work if asked in the correct manner. The sign of the pentacle is potent to control elementals.

It should have one point upwards when used for this purpose, because then it represents spirit ruling over the kingdom of the elements. Some magical practitioners regard the four elemental elements as being literally kingdoms and they give their names as Paralda the king of the Sylphs, Nixa the king of the undines, Djinn the king of the salamanders and Ghob the king of the gnomes.

The 4 powers of the magus are also related to the elemental kingdoms. The 4 ancient Latin names for the 4 powers were: noscere, audere, velle and tacere. It is believed that to be balanced, all these powers had to be present in the magic user, there is also a correspondence between the 4 elements and the 4 powers. Noscere to know corresponds to air, audere, to dare, to water, velle, to will to fire. Tacere, silence to earth. A 5th power ire to progress or evolving is spirit, the mid-point in circle or mid- point in the pagan cross of the elements.

To know means to gain the knowledge to do ritual magic.

To dare is to practice magic.

To will the manifestation through visualisation and personal power or energy.

To keep silent, to be silent about what you are doing. This last part is especially important as talking about the ritual or spell diffuses the energy flow. Silence also keeps unsympathetic people from directing negative energy or thought forms towards your efforts.

The ancient Celts saw the 4 quarters as being controlled by winds and called them the 4 airts. This is a Gaelic term for the 4 points of the compass, north, south, east, and west within the magic circle. In western tradition air is east, fire is south, water is west and earth is north. This attribution is based on the prevailing winds in Britain. The south wind brings heat and dryness, while the west wind brings warm rainy conditions, the wind from the east is cold, dry and bracing. The north wind is cold and freezing and brings snow. The Gaelic airts had a traditional association of colours attributed to them. East the crimson of dawn. South the white light of high noon. The west the grey of twilight and the north the black of winter.

In modern neo pagan and Wicca the aspects are as follows:

Types of elementals, where they dwell and what the do for us.

Fairies and elves: forests, groves, fairy hills and rings, fields and wild places, they are also attracted to rose and herb gardens. These folk have the knowledge and magical secrets of herbs, stones and animals.

Gnomes, trolls and dwarfs: found in caves, mines, under bridges and hollow hills, they know the location of precious gems and metals and how to forge and form them.

Brownies, pixies, and kobolds: found in homes, cottages, stables, barns in fact any place where people live, frequent or gather in groups or where domestic animals live, the are also found in attics, cellars and wine cellars.

They will often protect the home and belongings and the live stock of people they care for and will do small chores at night. These folk are called by various names in different countries, here are some of the many names found in folk tales and mythology.

In egypt the elemental rulers were the children of horus.

South = amset or kestha or mestha. [All the same god.]

To the Cabalists the archangels ruled the quarters, Michael was fire south. Gabriel was water west. Auriel was earth north and Raphael was air east.

To Wiccans who use astrology the south is represented by the lion and Leo, the west by the eagle and Scorpio, the north by the bull and Taurus, and the east by man and Aquarius.

The masonic teaching is that the eagle of fire represents the spiritual side of mans nature, the bull is the astral body and water, the beast with the face of a man stands for the physical body and earth, and the lion is a symbol of will or mental body in the east. Which is said to relate to the key to the mysteries written by Elipas Levi which was translated by A. Crowley.

To know, to dare, to will, to keep silent are the 4 cabalistic words which corresponds to the 4 letters of the tetragram and the 4 hieroglyphic forms of the sphinx and its riddle. To know is the human head, to dare the claws of the lion, to will the mighty flanks of the bull, to keep silent the mystical wings of the eagle and this is the answer to the riddle of the key to the mysteries of the universe so the kabalists say.

In wicca the magical aspects of the elements are:

Earth: money, wealth, prosperity, fertility, health, healing, employment are all related to using the magic of earth and its elementals.